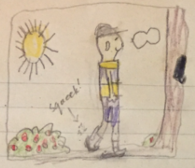 It was a bright and calm day.

George decided to go for a walk in the park. As he walked along he heard a squeak sound and thought there must be someone following him. Not wanting to be impolite, he didn’t turn around – but the squeak continued.

Finally, he couldn’t resist. So, he gently turned his head to look over his shoulder. No one was there! He thought, “I guess whoever it was turned down that different path a moment ago.” On he went, and guess what, the squeak returned! This time he thought, “It must be these new sandals I’m wearing.” He took one off and walked. The squeak could still be heard. Then he put it back on and took the other one off and walked some more. Still a squeak! “Mmmm, “ he thought further, “What could it be?” He looked to the trees, but failed to see a bird or branch that might be making the noise.

For days, the mystery lingered. Every time he walked there was a squeak, but where…? Could be the sound was from within him? He decided to go to a doctor.

Dr. Smitherson was a kindly man with wavy hair and thick glasses. He welcomed George and asked him how he was doing. After George told him about the squeaky noise, Dr. Smitherson said, “Hmmm.” (Doctors always say, “Hmmm.”) He examined George’s feet, listening with his stethoscope, and tapped them gently with his little hammer. At long last, the Doctor said with a great note of satisfaction, “Eureka!  I think I know what it is! To confirm my suspicions, let’s get an X-ray of both feet. Then, you can go home and I will call when the X-ray is developed.”

A week later, George was in Dr. Smitherson’s office again to hear the verdict. “George,” said the friendly Doctor, “You have a condition called ‘squeaky-i-tis’. It’s not serious and I think it will go away in a little while. Just rub this special creme on your feet every evening for two weeks and see what happens.”

George did so – and the squeak gradually grew quieter and quieter. Meanwhile, George looked up “squeaky-i-tis” in an online medical dictionary. Here’s what it said, “Squeaky-i-tis is a rare but painless and harmless condition of the feet, sometimes caused by drinking too little water, thus making foot muscles rub against one another while walking.”